It’s The End of The World As We Know It

23 February, 2013 By 7pxadmin in Sports & Fitness Comments Off on It’s The End of The World As We Know It 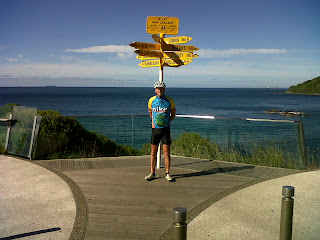 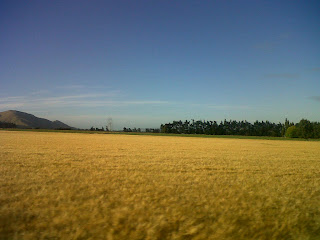 and I feel fine. Nothing to report about last night, no naked Swiss loonies, no lockouts, very boring!

This morning I was up and on the road just after 7 and planning on taking 4 hours to get to Invercargil, then legs permitting a further 2 to Bluff. As I was leaving I saw a couple of riders coming past, heads own and really motoring….so I tacked on the back. They were a couple of Belgians (even Belgians are OK once you get to know them) who were hell bent on getting to Invercargill to catch a flight. We took it in turns to punch a hole through the air and averaged 16. It was very flat (I mean flat in the true sense as used in the rest of the world) and the wind didn't really pick up until 10:00 and by that time we were almost there!

I felt so fresh that i threw my bags into the hostel and pressed on for Bluff, arriving at 11:45- about 2.5 hours earlier than expected.

Bluff itself is a dump but Stirling Point is another quiet, tasteful, litter-free site with the obligatory sign but, again, free of toothless slobs. There is also yet another spotless public loo right next to the sign, the last as you head south before the Antarctic Research Station.

I got my picture taken, then stole Frank's handshake with the Mayor. It seems that, as part of the publicity for Frank's charity fund-raising, a photo-opportunity with the Mayor had been arranged. When Frank was delayed a day getting his frame welded he missed the appointment. Well, it so happens that the mayor and his missus were at Stirling Point this morning (no idea why) so he shook my hand instead.

By the way, the Mayor of Invercargill appears to be David Guest.

So, I sort of made it, but obviously no medals this time. New Zealand will have to remain 'unfinished business' for now.

Apparently, Mrs Oakley feels that I am a little unkind to her son in my blog. I suppose the proper response to this is that she shouldn't have raised such a chump BUT, Beryl, you must understand that the teasing is just my way of showing affection. Now that I have tried an adventure without Knobby I can confirm that it rates a poor second. I don't know (yet) where the next trip will be but whenever/wherever it is I will do my utmost to drag his miserable faffing carcass with me!

I did a further 18 miles back to Invercargill (making 86 for the day) but cannot yet check into my hostel so I have purchased a six pack and am lying in the town park catching the sun and rehydrating. Most NZ towns have a public ordinance forbidding drinking in public so I may get a free bed in jail.

Assuming I don't get arrested I have a hot date tomorrow. Frank and I are meeting outside the Civic Theatre at noon – I hope he likes my frock.

Clouds in My Coffee

Having finished early I have lots of time to blog about all sorts of nonsense. I will tell you about some things I like about NZ tomorrow (did I mention that the pies are good?) but another thing (in addition to beer and bacon) to add to the dislikes…….coffee!

I was raised in a world where coffee was terribly simple. There were two types (with milk or without), it was made in seconds by pouring hot water over granules and it came in a proper mug. Then Starbucks ruined everything; in my opinion failure to pay tax is the least of their crimes. I regret to say that poncey coffee has taken over NZ in a big way. Everywhere you go there is a stupid language involving long flat whites and suchlike. But the worst thing is that they go through a great pantomime involving grinding beans and fitting filters and releasing steam that takes about a week. Eventually you get a coffee but it is often lukewarm, served in a thimble and costs about £3. All I want is a £1.50 mug of Nescafe!!!!

Yesterday was the second anniversary of the Christchurch earthquake. There were the inevitable moving services of remembrance but for me the shock was the footage of the devastation, both at the time and still 2 years later. I recall seeing remarkably little coverage in the UK at the time, or maybe I just didn't pay attention. Yet they give 5 minutes on the main breakfast new to the death of Richard Bryers.

I met a couple from Christchurch about a week ago. They said that they still get aftershocks and these are more frightening than the quake….because now they know what can happen.

Anyway, enough of this bollocks, I need to drink beer and watch out for the cops!