Every Day I Write The Book

24 February, 2013 By 7pxadmin in Sports & Fitness Comments Off on Every Day I Write The Book 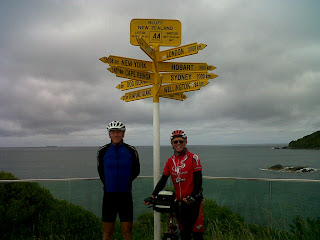 Don’t worry, your ordeal is almost over. Just this one and maybe a quick one when when I get back to blighty and then you are safe for a few months. Lots of songs to use up:

This Town Ain’t Big Enough For The Both of Us

Rather than meet Frank outside the Civic   like a dating teenager I rode my bike back down to Bluff to meet him. He had spent a night on Stewart Island and was arriving back at Bluff on the 9am ferry. With the benefit of nearly twice as long as me for his ride he has been able to take the indirect route and even abandon the bike here and there for a bit of sightseeing. Despite the many differences in our timetables our experiences and impressions of NZ were remarkably similar. We had a good natter over coffee then rode back to Invercargill together and had lunch before shaking hands and going our separate ways. Frank is heading to Sydney for another 600 miles of riding in Oz on his way home, leaving me with a last day to kill in town.

Before leaving Bluff we got one final photo of the sign with the two of us together. I think, looking at the picture, it is obvious who skipped half an island 🙁

Overall I would say that NZ lived up to my expectations. The scenery is, naturally, fantastic even though my itinerary precluded seeing many of the very best bits and the country has a wonderfully ‘frontier’ feel which reminded me very much of the middle bit of America. This is a country where nature has allowed the odd space for humans to flourish whereas most countries now seem to be the other way around.

Obviously my FAVOURITE thing is Pies but I think I may have already mentioned that. Public loos and proper pubs have also been mentioned. Other random things that have taken my fancy:

Attitude – This is a ‘no worries mate’ country. People are very laid back but not in a lazy can’t be arsed sort of way. Rules are definitely regarded as for the guidance of the wise and and there is very little petty jobsworthness.

Roads – I picked up a simple fold out map of South Island yesterday. It is about A3 size but that includes all the ads and other crap around the edge. Every single road that I have used is marked on this small map. One of the benefits of having so few roads is that you can afford to maintain them well and I have hardly seen a pothole since arriving. I have passed many road repair crews who seem to be repairing a surface that, in the UK, would be regarded as already near-perfect. My only small criticism is that they are very fond of the surfacing technique whereby you smear tar all over the road then chuck chippings over the top. The result, while smooth and grippy for a car, is very harsh vibration on a bike. Oh yes, most roads also have a fair shoulder in which cyclists can hide.

Food – with the notable exception of bacon, the food is very good. There is probably rather more emphasis on wrapping food in pastry than some would like but every meal I have eaten has been huge, well cooked and usually home made (I do mean made, not home microwaved). For those who like to see a lot of empty plate and smears of jus you probably want to go somewhere else but if you like big portions of freshly cooked food with plenty of carbs (if, for example, you are a cyclist) NZ should be high on your list.

Hostels – the YHA was very much as I remember them (a bit like boarding school) but the privately run hostels are great. Despite what I may have written previously the guests are mostly respectable and the accommodation is often more like a nice B&B.; If you book ahead most have some non-dorm rooms and, for between £10 and £20 per person per night you can stay in reasonable comfort.

Kitchens – virtually anywhere you stay will provide an equipped kitchen for your use. This was true of every hostel, nearly every campsite and even in fairly up-market hotels. Not only do these make self-catering very easy without having to haul half a kitchen around with you, they tend to become the focal point for evening gathering and there is always a conversation to be had if you need company.

Obviously I would like to be able to carve a New Zealand notch on my cross bar but it wasn’t to be. It was still a great experience and a lovely holiday and I think I have accomplished the important mission of understanding what could be offered to customers for a commercial trip in 2014.

I suppose actually there is one regret……….when I leave here The Sun Ain’t Gonna Shine Any More.