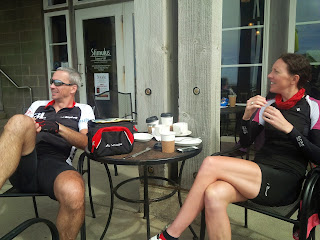 The job of sweeper mostly requires little more than riding slowly with the tail-end charlie. I am very good at it…if riding slowly was an Olympic event I would be in the medals, even without taking performance reducing drugs (or pies as most people call them).
However, there is always that nagging worry that one day EVERYONE on a trip will be fast. This has nearly happened on this trip. When the guests arrived they turned out to be a bunch of racing snakes with helium bikes and less fat than a veggie burger. Bugger.
This means I have to ride fast – I am nearly as bad at riding fast as I am good at riding slow.
To give you some idea of the extent of my problem I would like you to meet the pair in the photo. To preserve anonymity I will call them ‘Pierre and Katie’. The week before this trip they entered the Thruxton 24 hour race. Most people have the wit to enter as part of relay teams but about 40 idiots, including ‘Pierre and Katie’, entered the solo category.
Pierre rode a gobsmaking 410 miles, placing him fourth. Katie ‘only’ did 361 but this placed her faster than all but 7 riders and the fastest girl by a country mile. I hate her. She cycles past me on hills grinning and whistling, brow untroubled by the sweat that is drenching me from head to foot.
My sweeping is now being done from a veeeeery long way back – anyone encountering a problem will have time to completely rebuild their bike ready to watch me arrive and collapse sweating and gasping on the verge.
Bloody ‘Katie’!