6 February, 2014 By 7pxadmin in Sports & Fitness Comments Off on Dirty old Town
It is such a shame that any time someone finds themselves with a genuine bona-fide natural wonder on their hands they decide to build a crappy town full of motels and fast-food joints round it. Take Niagara Falls for example – the falls themselves are magnificent but the town of Niagara makes Southend look positively classy.
In Rotorua the normally thick crust that stops us all burning our feet is more or less absent and the area abounds with geo-thermal activity. There are several reserves where one can watch geysers, swim in hot pools, inhale sulphurous emissions from boiling mud and generally be impressed by how ‘not normal’ it all is. Apparently this means that we will all also want to go Bungy jumping, ride down hills in inflatable balls, ride in jet boats and generate adrenalin in a thousand other ways as well. Because of all this you need a thousand motels and a lot of Kentucky fried chicken!

Our ride to Rotorua was mostly very lovely, apart from a 10 mile stretch on Highway 5 which was hilly (quelle surprise), busy and with a raging headwind. The canny Kiwis have done a clever thing…….although officially called Highway 5, this road is also known as The Thermal Explorer Highway. So, when you are slogging up a hill into a gale with trucks trying to kill you you don’t give a damn because you on the Thermal Explorer Highway and, therefore, officially Indiana Jones.

My tour leading credentials have taken a slight knock today as the only people yet to arrive at the hotel are the riders from the very front and very back of the group. Those in between have vanished off the face of the earth. If they don’t turn up soon I suppose I will have to go and look for them, the little rascals!

For want of any more interesting picture, here is the new love machine. She has some personal freshness issues that I should tell you about some time. 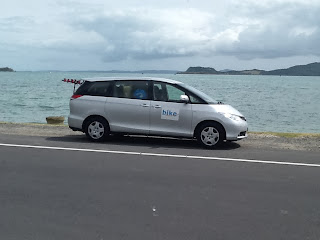