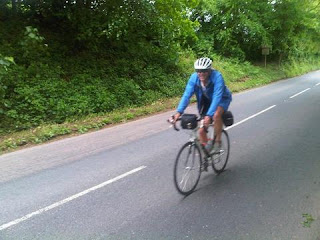 Here is yours truly reaching the top of the biggest climb in Devon.

Today was a game of two halves; the morning was spent up and down like a whore’s drawers over the Devon lumps while the afternoon was spent blasting across the Somerset levels.  We started late because breakfast, while huge and magnificently cooked, was served very slowly.  It was almost 9:45 when we finally got rolling but overall we made brilliant time and got to our hotel around 5:30.

Everyone managed to not fall off today and the sun even came out a bit in the afternoon so overall a good day.

Tomorrow is a biggie at 105 miles and it is forecast to hurl it down all day.  🙁  On the bright side the Holiday Inn does a free buffet breakfast and I intend to eat their profit for the whole of May. 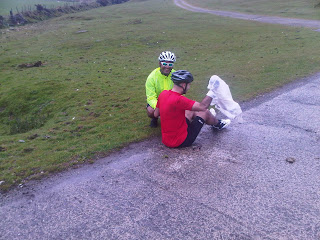 Yup, man down.  But first the important stuff.

It was a fairly hilly 95 miles today with nearly 7000 feet of climb.  The weather ended up not nearly as bad as forecast and it only really rained to any effect for about half an hour.

We are now in Oakhampton, Devon (this really doesn’t have the same ring as Eureka, Nevada) and by sheer good luck the hotel doesn’t have Sky so no football.  With any luck my colleagues will go and watch it down the road leaving me to my pint and crossword.

OK, yes we have a wounded colleague.  Given that it is Michael I am astonished to report that it wasn’t his fault.  He was crossing a cattle grid on the moor when a spooked horse darted in front of him.  He braked hard on a wet cattle grid and physics took over.

He has some spectacular gravel rash and is quite shaken but he will live.  The main thing is that his bike is OK!

I am pleased to say that I feel quite fresh, I had been worried about keeping up with the youngsters but so far so good.  Alan will be pleased to know we have two faffers in the group so my morning ritual of sitting impatiently on the bike at 9.01 muttering to myself is still being observed. 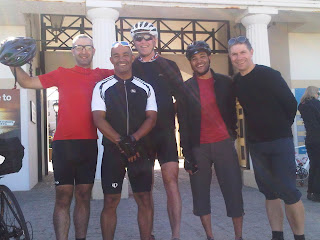 Let me introduce you to my partners in crime, from left to right:
Michael
John
David
Stuart

The dick in the middle is obviously me.

We got to Penzance on time on the train from hell – bank holiday special with people and luggage everywhere.  The 5+ hours could have been quite tedious but it was possible to occupy hours at a time by trying to pop to the buffet car.

It was a quick 10 miles to Land’s End but some of my colleagues were a bit alarmed by the rolling terrain – they have done all their training on the flat!  We were feeling pretty smug about our planned 9 day trip until we met a couple of insufferably smug Jocks who were just starting a 6 day trip.  150 miles per day for 6 days is a hell of a lot on a diet of deep fried Mars bars!

Now we are back in Penzance for vital fluid replacement.  Tomorrow we start proper.

Starting May 27th I will be repeating the 2005 expedition but this time in just 9 days (last time we took 10).  Although I have ridden higher daily mileages OR more days this is the first time I have ever tried to do 9 consecutive 100 milers.

I am riding with some work colleagues who are all virgins as far as long distance cycle touring is concerned.  I have maturity (who laughed) and experience on my side but they have youth and vigour – they are between 11 and 17 years my junior.

We catch the morning train to Penzance then quickly nip down to Land’s End for the ritual photos before returning to Penzance for the night.  We then start the real work on Saturday.  At  the moment the weather for the weekend is mixed news:  wet (bad) but with strong winds from the SW (very very good).

Welcome to our Blog

23 May, 2011 By 7pxadmin in Sports & Fitness Comments Off on Welcome to our Blog 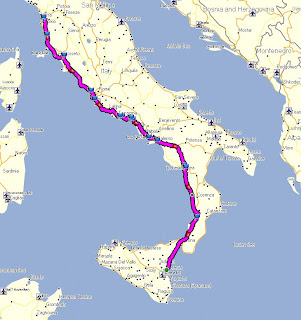 The whole email thing got a bit out of hand in Merica so we are moving into the 21st century and using a blog now.  Our next adventure together will be Italy in late September 2011 when we will cycle from Pisa to Sicily following the Mediterranean coast.

Meanwhile Steve will be starting his second Land’s End to John O’Groats on Friday 27th May; this time accompanied by some work colleagues.  Although not an official ‘Grumpy Old Men ride’ he will make the odd post along the way.