Whistle Down The Wind 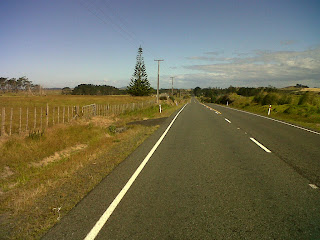 A busy old day! The tour bus turned up at 8 sharp and started its journey up to the cape. It is really intended for people with a day to waste so stops at all the tourist attractions on the way. The first of these was to walk into the forest and see the 'really enormous trees. 'Excuse me', I asked, 'Are these trees so enormous you could cut a hole and drive a Chrysler Town and Country through one?'. The Guide thought for a moment then conceded that no, this was not possible. I stayed in the bus.

After a few more stops we turned left and drove the last 30 or so miles to the Cape up 90 Mile Beach. This beach is so named because it is about 60 miles long (yes I did ask but can still cannot explain), the bus actually drives on the sand, weaving in and out of the surf. I can only assume that Skania issues a 6 year anti-corrosion warranty and the canny Kiwis are getting their money's worth.

Finally at about 1pm we arrived at Cape Reinga. In the UK equivalent – John O'Groats – there is the usual sign with mileages to various major cities around the world. The right to photograph people in front of this sign belongs to a rather disgusting fat toothless slob who wears a vest sporting the remains of his last few meals. Not only does he charge you to be photographed at the sign, when he goes home (presumably to throw more dinner down his shirt) he takes it with him.

The Maori believe that Cape Reinga is the point from which the spirits of the dead depart the mortal world and the place has a quite and respectful atmosphere. There is a pretty little lighthouse and their version of the afore-mentioned sign. No shops, no toothless slob, no fee and 24×7 access to the sign.

My fellow bus passengers gave me a warm farewell (I even got a kiss) and I finally started the business of cycling at around 2pm. For the next 30 miles there wasn't a single yard of flat and there was an enormous headwind. When touring fully laden I normally expect to average about 12mph. Today, with fresh legs, the adrenalin pumping and me working as hard as I could manage I achieved 10.7. Bugger.

After 45 miles I gave up (to be fair this was within the nominal range of distances I thought I might manage) and turned into a lovely campsite in Pukenui. I am now showered, fed and watered (well, beered). The campsite is full of young backpackers and when I complained to them about the headwinds they said 'yes, NZ is windy as f**k but today has been calm, it is often much worse'. Bugger.

NZ campsites have a major innovation that I have not seen elsewhere – they have proper kitchen with all utensils that you are free to use. This makes cooking so much easier and more pleasant and it also offers a nice comfy room with table and chairs at which you can sit and write bollocks for your blog.

The photo is just a view from about a mile up the road because I realised I had no photos on the phone that I could use.

PS Frank – if you are reading this, I REALLY didn't need to hear that you have a tail wind and did 100 miles yesterday. Bugger.