Following a well deserved rest day, the crew faced two uneven days of riding due to an issue with the hotel accommodation. The original plan had been to ride 45 miles on the first day and then 100 miles on the following – the change in plan however, meant that this turned into 25 miles on one day and then a whopping 120 miles on the next day. This was too much to handle for some of the crew and a cunning plan was hatched which would allow the crew to cycle 45 miles, then pick up a Hertz rental car to take them back to the hotel and forward again the following morning – this plan, although somewhat complicated was doable, until however, the crew arrived at the Hertz depot (the only car rental firm in town) to find a sign saying it had closed 6 weeks ago! Hertz for their part, offered no explanation as to why nobody was notified to say there was a problem with the reservation. Luck was with the team though, and they managed to find a suitable car to hire for the day.

On the evening of 15th August the crew celebrated the birthday of one of its members – Plum turned 60 and had ridden an impressive 120 miles that day! As a birthday treat he was taken out for some food and a beer or two! Happy hour beer pitchers (4 pints) were a mere $4.20 and the birthday boy was treated to a free pitcher. 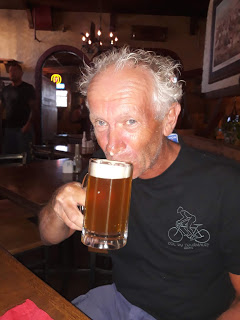 The day following Plum’s birthday, the crew rode a tough 91 miles with a significant uphill climb to Medicine Bow, a small quiet town of under 300 residents with one landmark building – the historic Virginian Hotel, an impressive building disproportionately larger than the town’s other buildings. Medicine Bow’s other claim to fame is that it was the setting for the novel and TV series called the Virginian. Unfortunately the team didn’t stay in the Virginian Hotel, but spent the night in a shabby motel down the road. 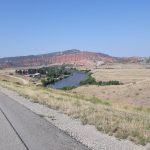 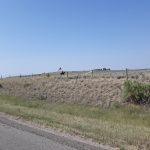 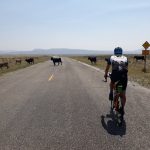 Heading out of Medicine Bow the team pedalled a hilly 58 miles to the town of Sartogna – another small town, famous for its hot springs, bird watching, fishing and hunting. The town itself has an area of approximately 3.40 square miles (including water), but surprisingly boasts its own airport – Shively  field airport, located around 1 mile from the town.

The next day saw the cross over into Colorado as the team headed to that day’s destination of Walden – another small town situated in Jackson County Colorado. It proved to be a particularly strenuous day, as every one of the 67 miles of the journey was uphill, accompanied by a strong headwind – as if that wasn’t difficult enough, the team experienced the first rain of the trip as well as low temperatures, making it all in all, one of the toughest days yet. The highlight of the dismal day was seeing some bald eagles perched on some telegraph poles at the side of the road – the bald eagle has been a US emblem since 1782 and have an impressive wing span of approximately 2 metres!

At Walden, everybody had a rest and a full meal – gourmet food however, didn’t seem to have yet found its way to Walden.

The following morning, August the 19th, was a cold start – gloves, coats and overshoes were needed as the crew set out to tackle the 78 mile ride of that day, which included a pass that topped out at over 9500ft. Having spent so many weeks riding at high altitude, the team was by now well adapted to the thin air and the 32 mile ascent was not overly difficult, the 17 mile descent on the other side was positively fun! Even a short shower in the afternoon didn’t spoil the day! 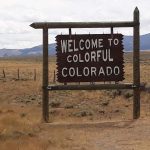 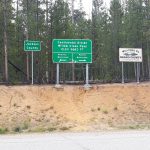 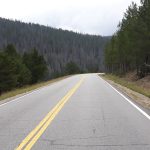 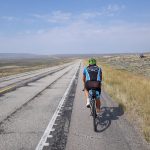 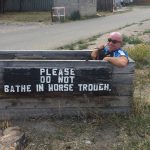 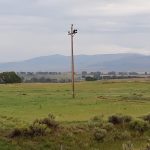 That day’s resting place was Kremmling – a slightly larger town with a population of approximately 1444 people,  despite its size Kremmling also boasted its own airport.

The crew only seemed to find a mere 2 places which served food, both of which they tried – one was to celebrate one of the team’s 74th birthday. An impressive way to spend one’s 74th birthday, cycling right across the US. Unfortunately fine dining was not a strength in Kremmling either, one of the team attempted to be healthy and opted for a side order of green beans, which turned out to be deep fried green beans!

Having rested up, August 20th featured an impressive 67 mile ride to Hoosier Pass, at over 115000ft this was the physical high point of the trip. The cycle paths along the way were outstanding, and the crew rode through the exclusive Rocky Mountain ski resort towns of Silverthorne, Frisco and Breckenridge. The final 5 to 6 miles were the most challenging, but for the following days, the team will have several days of descent to look forward to. That night was spent in Fairplay – a popular destination for climbers, hikers and those seeking winter snow sports. 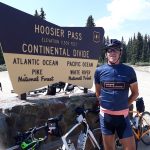 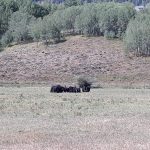 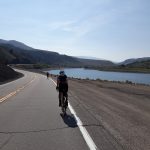 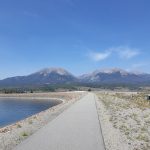 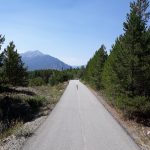