Yes, the lazy option – reissue an old movie with extra content (the stuff that wasn’t good enough for the original).  After much queuing we eventually got our flight home and our fantastic bike boxes survived in-tact.  The taxi was waiting for us and we were tucked up in our beds by about 2am.  Sadly we both had to work today so the sleep was all too short.

So, Italy…….a seriously lovely country with a fantastic climate and mostly nice people. Too much litter, scary driving in cities, expensive restaurants, but never-the-less a great place to visit. We did about 830 miles in total and, although there were pretty challenging days, overall its was not too demanding. The bikes mostly behaved: Alan broke a spoke and I broke a rack but we didn’t get a single puncture. Our bodies also behaved, with no serious ailments and we have come home fitter, browner and lighter than we left. To do proper camping you would have to travel earlier in the year but the heat would be prohibitive, travel any later and even hotels are likely to be shut so I think we got it about right.

If I had to pick one highlight it would be the plumet to Amalfi on the most spectacular roads I believe it is possible to find. 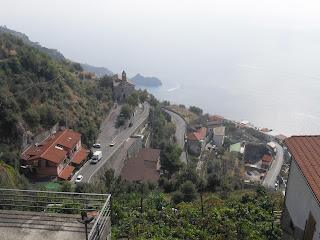 But it was all good.  Despite the title of this blog site we are seldom grumpy when on the road; somethimes tired, often challenged by unfamiliar surroundings but always thinking about where to go next; and that is something we have a few ideas on!