13 September, 2014 By 7pxadmin in Road Cycling Holidays, Sports & Fitness Comments Off on The Bridge

Elton John but I’m not going to help you with them all!

Has anyone seen the footage of the ‘Merican suspension bridge that fell to bits when it got caught in a cross wind back in 1940? It started to wobble and twist and eventually fell into the sea.  Well this was the 2nd attempt which has fared rather better.  It is the Tacoma Narrows bridge which we crossed on our way to Port Townsend with our first load of bikes and riders. 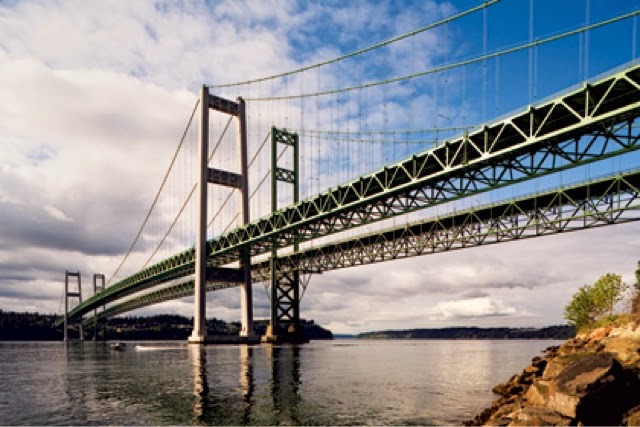 No excitements to report yet – no lost wallets or keys locked in cars but there is still plenty of time :-).
The forecast for tomorrow is clear blue skies and highs in the mid-20’s… I believe that fair weather is also predicted for Blighty so no real cause for smugness but, never the less, I do feel a little smug.