Now That’s What I Call Music

23 March, 2014 By 7pxadmin in Sports & Fitness Comments Off on Now That’s What I Call Music 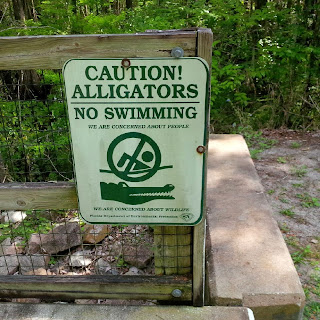 You probably thought I was dead!  With all this cycling and sitting by the pool to be done there just isn’t time for blogging.

Just The Two of Us

On Friday there was a tourist outing to the Kennedy Space Center (I have deliberately adopted the stupid Merican spelling system) but Neil and I, being made of sterner stuff, went off on our bikes.  We returned with a splendid 86 miles under our belts.  We even managed to find a few hills for a bit of variety.  Although I was pleased to have managed 86 miles I was royally pooped at the end and ended up having a microwaved lasagne and crawling off to bed by 9:30.

Do You Really Want to Hurt Me?

Yesterday we went for a long ride on a cycle trail though the Green Swamp.  60 miles of paved traffic free trail though fascinating terrain.  Apparently there are more than one million alligators in Florida and, though we didn’t see any, they were clearly around.

In the evening we went to an excellent ‘Brew Pub’ for food and……brew.