27 February, 2014 By 7pxadmin in Sports & Fitness Comments Off on Love Shack 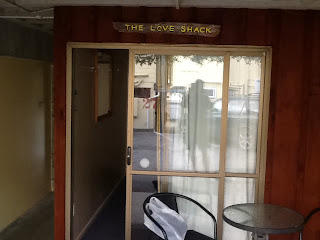 If anyone has endured these witterings since last February they may recall that in Queenstown there was an unfortunate incident involving a very small towel and a locked hostel door. It was with some trepidation that I checked in to the same hostel last night……..Would my photo be on the 'banned customers' board? Would Fritz still be trying to lure me into his room? Would I get locked out wearing nothing but a flannel again?

The answer was thrice NO.

Yes, we are back in Queenstown. Yesterday they all went on a cruise up Milford Sound which, according to the group smart arse, isn't a sound at all but a Fjord. Judging by the photies it was pretty cool and I wish I could have gone. Instead I spent the day hauling bikes and bags back to Queenstown then going back to haul people up the same road. 380 miles in total 🙁

As an author ( I have decided that writing a blog technically make me a published author!) there is always the risk of writer's block, particularly when it comes to song titles and on the occasional day I don't file an entry it often because I just cannot come up with a song. Yesterday was looking like such a day but then, arriving at my hostel, the song was revealed to me like a message from God…..see photo of my room. There wasn't any loving in the shack.

We had a good meal in a lakeside pub and a few tasty fermented beverages but had to leave quickly when a guy got up and started torturing a guitar. Back at the hostel they were partying like it was 1999 so I put my earplugs in and thought grumpy thoughts.

Today we all head to Queenstown airport for our first flight on the way home. I expect that most of you will, at some time, have wondered how much crap you can fit in a Toyota Previa. The answer it seems is: 5 boxed bikes, luggage for 6 people for one month, two people and a small packet of polos. Sadly this leaves 1 bike, 1 set of bags and 5 people so it will be two trips to the airport.