If I Could Talk With The Animals

5 October, 2012 By 7pxadmin in Sports & Fitness Comments Off on If I Could Talk With The Animals

Blog for Thursday – hopefully that is all days accounted for!

It was a very short day – just 46 miles – and totally different to everything so far in that:

1/ the sun didn’t come out….well not until lunchtime and
2/ the scenery has completely changed. Today we had endless fields of salad crops or strawberries with hundreds of dagoes (I believe Latin Americans may be a little more PC) toiling in the fields. The temperature was around 70 yet they mostly had sweatshirts and hoods and even the odd thick coat. One or two of them may even have had a work permit!

What does all this have to do with the song de jour? Absolutely nothing! This, however, does:

For some time I have been building a mental list of the wildlife that we have encountered and it surprisingly long list:

Whales – we ae now pretty certain they were whales not minkies

Elk – lots of deer but some proper Elk too 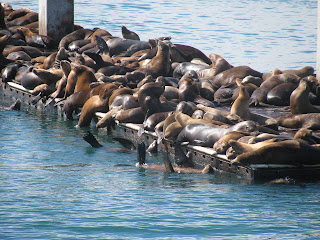 Sea Otters – two separate sightings, one of 3 together and another diving for clams and opening them

Coyotes – though not carrying anvils nor anything manufactured by the Acme Corporation.

Polecats – or some other long thin rodenty thing a bit like a Pine Martin.

Bluejays – or something we think is a bluejay

Vultures – not half as nice as the Jungle Book version

Birds of prey – chuffing loads of various sorts but, sadly, no bald eagles. Though if we can catch a buzzard I have a sharp razor…….

We still have some 450 miles to go so who knows what else we might see – probably unicorns.

Our campsite surpassed itself tonight with a ‘club room’. Basically a nice warm rooms with pool table, sofas and a chuffing great plasma TV. Alan was as happy as the proverbial pig in brown stuff scouring the airwaves for Merican Football.